Skip to main content
Cohesiondx.com
There is a newer version of Cohesion available. Click here to view the latest documentation for this page.

Are you looking for the latest documentation?

Documentation for Acquia Cohesion V6.0 onwards has moved to https://cohesiondocs.acquia.com

Using a version of DX8 prior to version 5.4.0, you can only import/export using DX8 sync if both the original site and destination site are using the same version of DX8.

Versions prior to 5.4.0, exports from DX8 Sync could only be imported to sites with the same version of DX8 that they were exported from. For example, if you exported a package using DX8 Sync from a site running DX8 version 5.2, you could not import to a site running DX8 5.3.

Now an automatic entity update tracking system is in place, so from DX8 version 5.4.0 onwards, you will be able to export from sites running older versions of DX8 (starting with 5.4.0) into sites running later versions.

Install the DX8 sync module, you can do this through the UI by navigating to: /admin/modules or running the following drush command in your terminal:

For a guide to using DX8 sync through the UI, see Package export and import.

DX8 Sync allows you to export all of your DX8 configuration including styles, templates and components along with all file entity asset dependencies as a single package. You export this package to the sync directory and commit to your repository for later deployment in a similar way to performing a core config export/import.

This is the location of your site configuration files.

In settings.php you will need to enable the block of code as shown below. If you're using Drupal core config import/export, you will need to add CONFIG_SYNC_DIRECTORY => '/directory/outside/webroot', as an entry to the $config_directories array below.

It's possible to set the dx8_sync directory to the sync directory as core (which is /sync by default) or you could export to the filesystem in sites/default/files for example.

Configuring entity types to include in the export

With DX8 and the DX8 sync modules installed, navigate to: /admin/config/development/sync/export_settings from here you can select which entity types will be scanned for the export.

To export all DX8 packages and dependencies to your sync directory, use the following drush command:

This will create a file called: [your-site--name].package.yml_ in your sync directory. The file has an underscore after the file extension so that Drupal core config import/export doesn't detect and process it.

To export your DX8 configuration using a custom filename, use the following drush command:

This will create a file called:  myfilenamehere.package.yml_ in your sync directory.

To import all previously exported *.package.yml_ files from your sync directory into the current site, use the following drush command:

Note that you will need to use one of the following options to tell Drupal what to do when it finds differences between the entities in the *.package.yml_ files and your site.

While the import is running, your site will be placed into maintenance mode.

Using a module such as configuration split you can then split out specific configuration by Drupal module.
For example, you could create a 'split' which includes all configuration except DX8, as you would then use DX8 sync to export DX8 configuration including any file/image asset used. 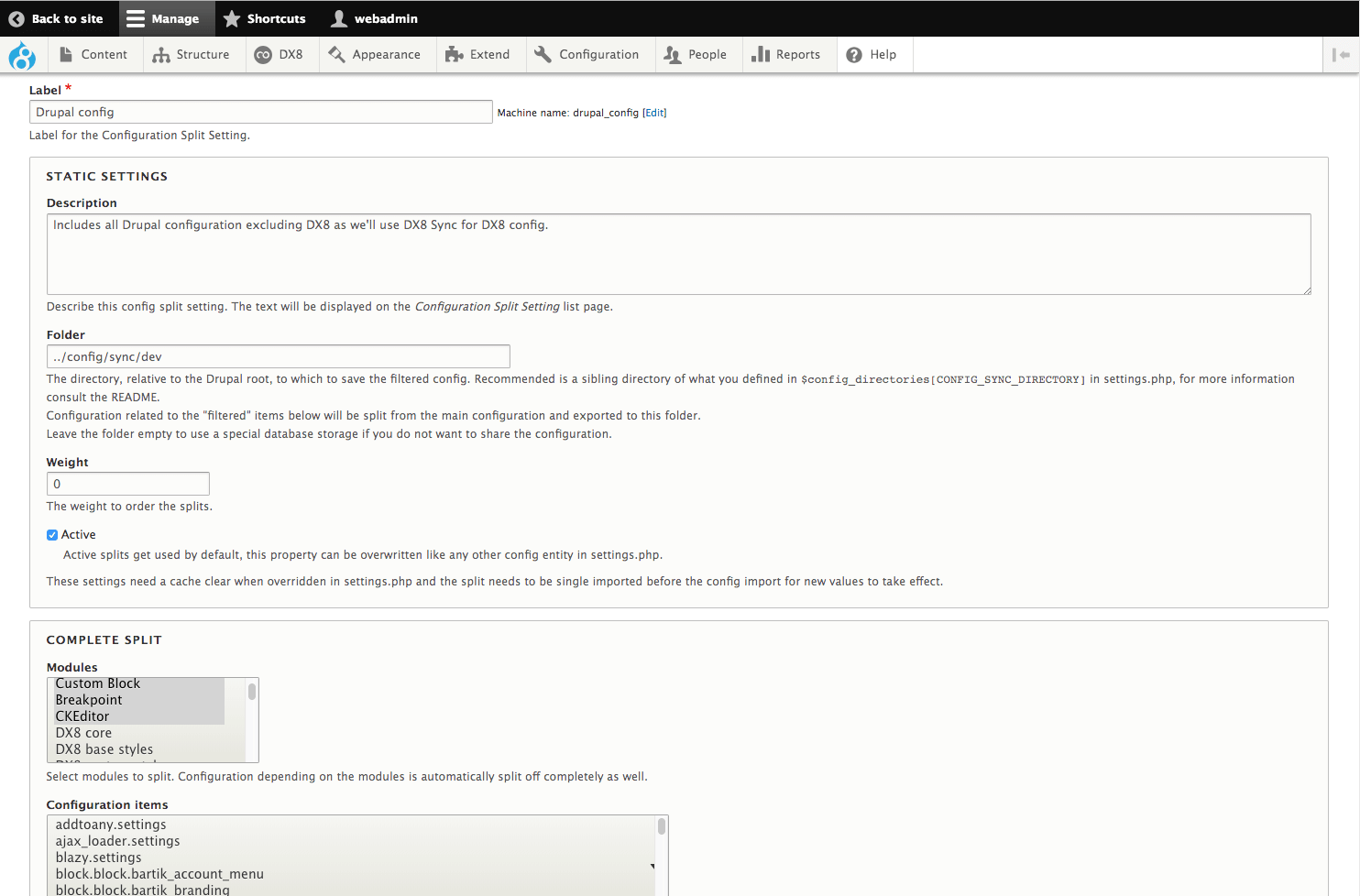 Find out more about configuration split module on their online documentation.

To raise a ticket, sign into Acquia Cloud and select Help in the top menu.